Toyota Tsusho UK Ltd. (TTUK), working in collaboration with Germany-based Uniper, a leading international energy company, - Siemens Energy UK&I, a major player in the energy business, and U.K.-based Associated British Ports (ABP), the UK’s leading port owner and operator, launched a feasibility study looking at the decarbonization potential of hydrogen, dubbed Project Mayflower (the “Project”), at the Port of Immingham in the United Kingdom in September 2021. The Project was selected for the Clean Maritime Demonstration Competition, funded by the UK Government’s Department for Transport and delivered in partnership with Innovate UK.

The U.K., which was the first G7 country to legislate zero CO2 emissions, has committed to slashing greenhouse gas (GHG) emissions 78% compared to 1990 by 2035 and achieving net zero emissions by 2050. By business sector, transport (including ports) accounts for 30%*1 of total GHG emissions, the largest proportion. Looking ahead to the 2021 United National Climate Change Conference (COP26), which will be held in the U.K. in November, the government is working with industry to reduce GHG emissions including implementation of subsidy programs.

At the Port of Immingham, which handles the largest cargo volume in the U.K., the technological and economic feasibility of producing, supplying, and using hydrogen will be verified to create a decarbonization model within the port using hydrogen with the aim of formulating a plan for commercialization in the future. Specifically, this will look at the potential options for hydrogen production, transport and storage and as a replacement fuel source for diesel and heavy fuel oil used for transport, through conversion to fuel cells. Also, the development of potential hydrogen applications for port cargo handling machinery will be analyzed and evaluated.

The project will be carried out by a four-company consortium of Uniper, Siemens Energy, ABP, and TTUK. Uniper is providing project management and leading on the technical feasibility. The aim is to use renewable energy to produce green hydrogen*2 using Siemens Energy’s cutting-edge water electrolysis equipment. ABP will leverage its know-how gained from operating a total of 21 ports in the U.K. including Immingham to support the use of hydrogen at ports.

The Toyota Tsusho Group has been investigating a model of local production for local consumption of hydrogen at the Port of Los Angeles in the United States since September 2020 with the aim of converting equipment to fuel cells*3. The group plans to investigate development of infrastructure including port facilities and hydrogen fueling as well as GHG emissions reduction volumes while making the most of its expertise in port decarbonization.

Under the Project plan, feasibility will be examined from September 2021 to March 2022, and starting in 2022 commercialization including securing financing will be investigated with the aim of commercialization with production of 20 MW of green hydrogen for use at the Port of Immingham by 2025.

The Toyota Tsusho Group is contributing to the transition to a decarbonized society by accelerating businesses that reduce GHG emissions throughout the industrial life cycle and promoting initiatives for achieving carbon neutrality. 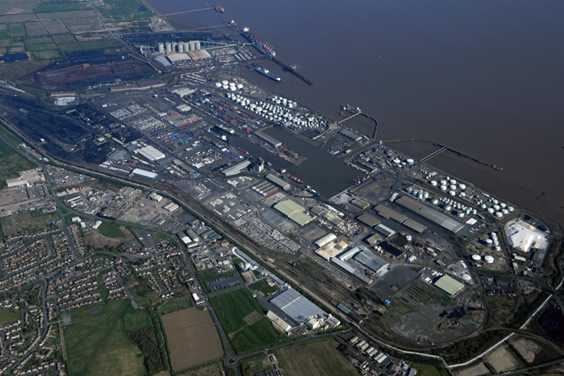 *1 2020 GHG emissions data from the U.K. Office for National Statistics

October 14, 2021 announcement: Toyota Tsusho to Conduct Feasibility Study into Local Production for Local Consumption of Hydrogen: Seeking to use fuel cells in large-scale machinery at the Port of Los Angeles

Project Mayflower is part of the Clean Maritime Demonstration Competition, funded by the Department for Transport and delivered in partnership with Innovate UK.

Announced in March 2020, and part of the Prime Minister’s Ten Point Plan to position the UK at the forefront of green shipbuilding and maritime technology, the Clean Maritime Demonstration Competition is a £20m investment from government alongside a further c.£10mfrom industry to reduce emissions from the maritime sector. The programme is supporting 55 projects across the UK, including projects in Scotland, Northern Ireland and from the South West to the North East of England. As set out in the Clean Maritime Plan (2019), Government funding has been used to support early stage research relating to clean maritime. The programme will be used to support the research, design and development of zero emission technology and infrastructure solutions for maritime and to accelerate decarbonisation in the sector.

Uniper is an international energy company with around 12,000 employees in more than 40 countries. The company plans to make its power generation CO2-neutral in Europe by 2035. With about 35 GW of installed generation capacity, Uniper is among the largest global power generators. Its main activities include power generation in Europe and Russia as well as global energy trading, including a diversified gas portfolio that makes Uniper one of Europe’s leading gas companies. In 2020, Uniper had a gas turnover of more than 220 bcm. Uniper is also a reliable partner for municipalities, public utilities, and industrial companies for developing and implementing innovative, CO2-reducing solutions on their way to decarbonizing their activities. As a pioneer in the field of hydrogen, Uniper has set itself the target of operating worldwide along the entire value chain in the future and implementing projects that will make hydrogen the mainstay of the future energy supply.

The company is headquartered in Düsseldorf and currently the third-largest listed German utility. Together with its main shareholder Fortum, Uniper is also the third-largest producer of CO2-free energy in Europe.

Siemens Energy is one of the world’s leading energy technology companies. The company works with its customers and partners on energy systems for the future, thus supporting the transition to a more sustainable world. With its portfolio of products, solutions and services, Siemens Energy covers almost the entire energy value chain – from power generation and transmission to storage. The portfolio includes conventional and renewable energy technology, such as gas and steam turbines, hybrid power plants operated with hydrogen, and power generators and transformers. More than 50 percent of the portfolio has already been decarbonized. A majority stake in the listed company Siemens Gamesa Renewable Energy (SGRE) makes Siemens Energy a global market leader for renewable energies. An estimated one-sixth of the electricity generated worldwide is based on technologies from Siemens Energy. Siemens Energy employs more than 90,000 people worldwide in more than 90 countries and generated revenue of around €27.5 billion in fiscal year 2020.

Siemens Energy is a registered trademark licensed by Siemens AG.

ABP is the UK’s leading ports operator with 21 ports and other transport related businesses creating a unique national network capable of handling a vast array of cargo.

The company contributes £7.5 billion to the UK economy every year and supports 119,000 jobs. Our current investment programme promises to further increase our contribution to regional economies around the UK.

Our five-year investment programme across the group is worth £1 billion. Our investment is designed to respond to the needs of our customers whose business relies on our ports for access to international and, in some cases, domestic markets.

Toyota Tsusho Corporation was founded in 1948 as the trading company for the Toyota Group. Today, Toyota Tsusho operates in more than 120 countries with approximately 66,000 Group employees, are all striving to contribute to the creation of prosperous societies. Toyota Tsusho continues to expand as a global leader in vehicle exports and automobile production support. The company has seven operating divisions (Metals / Global Parts & Logistics / Automotive / Machinery, Energy & Project / Chemicals & Electronics / Food & Consumer Services / Africa) focused around three business fields. These are the Mobility field, which contributes to future convenient societies, the Resources & Environment field, which ensures sustainable societies, and the Life & Community field, which supports comfortable and healthy lifestyles.